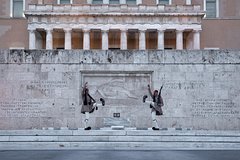 A Segway Athens journey. Athens tour from the ancient past to the modern present. The Tour Scenario:
A city that unfolds in front of your eyes. Different elements and colors of Atenas, Mythical stories and historical debates. Discover Athens beyond sightseeing.
Under hot sun and around the slopes of  the sacred hill of the Acropolis, gods and heroes wandered. The goddess Athena, flesh of the father of Gods, all mighty Zeus, was released from his head.  Athena, was the protector of the city of Atenas, which was the cradle of dialogue, philosophy, athletic equity and drama.

We invite you to share with us the story of Greek mythology and history which will inspire you. Gliding on a Segway through the streets of this mythical city is the way we choose to familiarize you with its secrets and charms. An extraordinary way, the SEGYOURWAY.

Should you follow us to this spectacular tour, we will cruise through a narrative of politics and ideals, of art and trade, of love and sorrow that is interlaced with the city. Choose A Segway Athens journey, one of our best excursions.

This website uses cookies to improve your experience while you navigate through the website. Out of these, the cookies that are categorized as necessary are stored on your browser as they are essential for the working of basic functionalities of the website. We also use third-party cookies that help us analyze and understand how you use this website. These cookies will be stored in your browser only with your consent. You also have the option to opt-out of these cookies. But opting out of some of these cookies may affect your browsing experience.
Necesarias Siempre activado

Any cookies that may not be particularly necessary for the website to function and is used specifically to collect user personal data via analytics, ads, other embedded contents are termed as non-necessary cookies. It is mandatory to procure user consent prior to running these cookies on your website.